"You're my Rock and my Redeemer; You're the reason that I sing;
I desire to be a blessing in Your eyes..."
excerpt from Terry Butler's Psalm 19

Truly Maudlin Music means general musical nattering, current and historic.
I confess I have not yet baked (yes, they really get baked in an oven!) my master tapes, necessary for producing good digital copies BUT I have put a number of .mp3 files that you can hear via Moonbird Music, my publishing site, or go direct to my music page on Soundclick or Soundcloud. Back in early 1994, I recorded some live piano demos, a few of which aren't bad. I recently created a video for one of them, Lucifer's Song (think C.S. Lewis' The Screwtape Letters), so now you can see and hear it on YouTube; lyrics at Moonbird Music. Back in Epiphany of 2010, I recorded Take Down The Tree (live room sound) at St Judes and put together a collection of appropriate images and uploaded the whole works to YouTube.

I occasionally mention this gorgeous guitar I got to play, built by luthiers Tom Ribbecke and Linda Manzer, called appropriately enough "Duet" and now you can see it. A truly lovely instrument, wanted a better guitarist than I am (but may have been purchased by a non-player collector... *whimper* 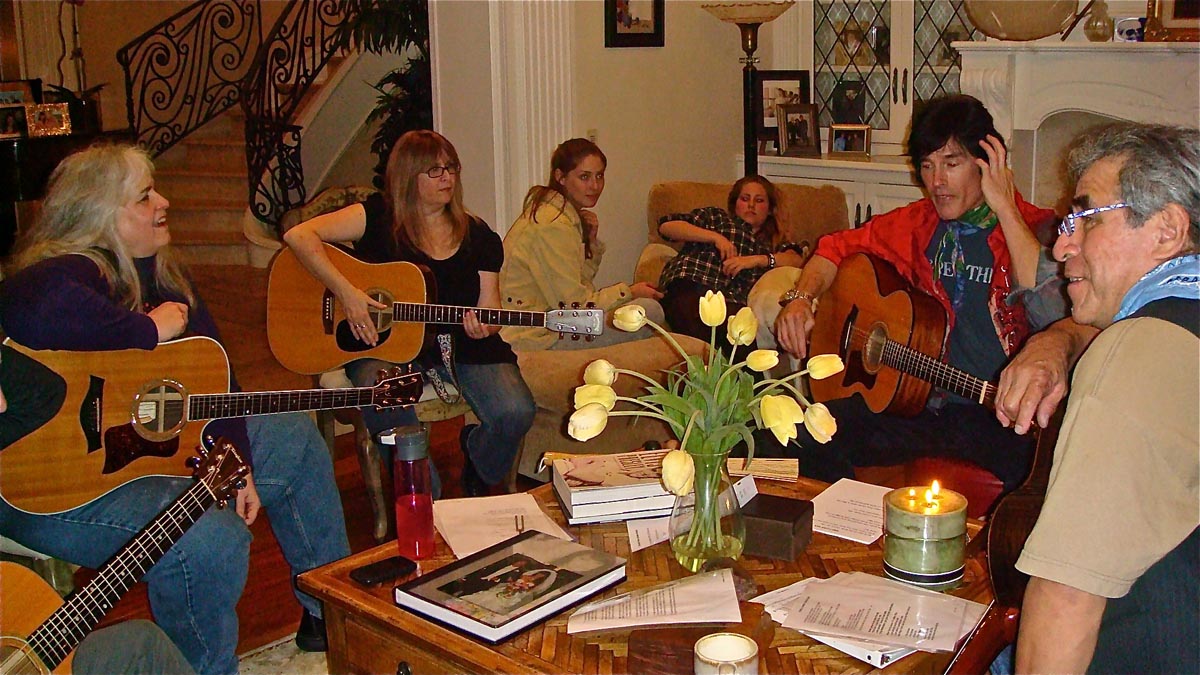 Sometimes I have the joy of playing music with old friends - not as often as any of us would like - but life is complex and pulls in many directions, so I'm just delighted to hang out and play guitars with Ronn Moss and Dave Storrs and Arturo Garcia, singing with fabulous Nancy O'Rourke (his wife), any time we can manage it-- really good fun! Of course, Ronn married in 2009 and spent spring 2010 competing in the Italian version of Dancing With the Stars (see the link on his last name), so it was with great delight we got together early in 2011. 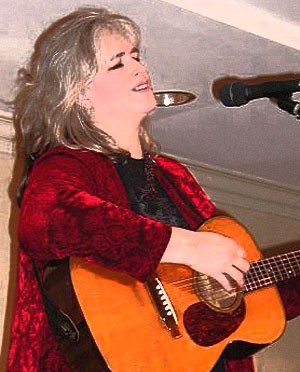 I spent nearly twenty years serving on worship teams at St Jude's in Burbank (10 songs, every week) and I am also honored to do the occasional 'filk concert' at science fiction conventions, usually regional events, like Loscon, Condor, and Conjecture, when it was happening, and occasionally Westercon. But in 2006 I was asked to perform two concerts, in two different settings, at WorldCon (L.A.conIV), the World Science Fiction Convention. These performances give me the opportunity to sing some really important songs like I Gotta Kill My Clone... in fact, filkers and the filk audience are wonderfully open and I've been able to bounce songs off them that I wouldn't be willing to risk in a more typical concert setting. I started writing songs which used science fictional and fantastic elements long before I knew that other folks were doing anything similar. I blame my brother: he gave me a subscription to Analog in my early teens. It was a great gift.


I am being nagged (and rightly so, I admit it) by Barney Evans and various folk within the filk community for a CD (or two, three?) of unrecorded material. I do some live recording but actually sitting down and recording alone, well... I'm working on it.

Speaking of the science fiction community, I was given the amazing opportunity to play a couple of songs for the 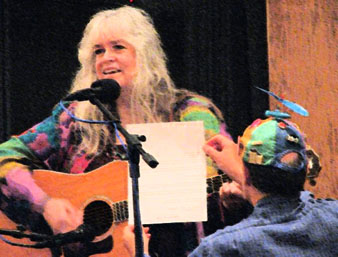 75th Anniversary of LASFS (Los Angeles Science Fantasy Society), so I enjoyed a wonderful banquet at The Castaway and watched the moon set over the city, lights sparkling below us, while the rich history of science fiction and fandom in Los Angeles was poured out. Ray Bradbury didn't come as he'd already celebrated LASFS' 75th anniversary the week before with friends at Clifton's Cafeteria where they often met, in decades past. I didn't know that the brilliant special effects artist Ray Harryhausen was also part of early days at the LASFS; he sent a letter from London apologizing for his absence and begged off due to the rigors of intercontinental flights at his age (I dunno, I bet he'd still accept a flight into space!). Perhaps the most poignant moment came when Jerry Pournelle said, "As a young man I hoped to see the first man walk on the moon; I never dreamt I would live to see the last man walk on the moon." So it was appropriate that one the songs I sang, a few minutes earlier, was High Frontier, written after the Columbia shuttle tragedy; my attempt to honor the men and women who know full well the risks and embrace them with fierce joy.

Some years at Mythcon I do music, ranging from solo concerts to the madness of Lord of the Ringos - the twisted brainchild of Tolkien artist Ted Nasmith and retired Tolkien professor Mike Foster with late additions by yours truly - basically Tolkien filk'd to Beatles songs. In 2009 at Mythcon 40, Mike and I did a mostly spontaneous performance of "Like A Rolling Ring" - or classic Dylan slammed into Tolkien... you get the idea.

I don't remember life before music. My mother, trained as a concert pianist, had a piano and I started learning somewhere around four or five years of age; by the time I was six years old I was taking private lessons at the USC Preparatory School of Music; I studied there for six or seven years at which time my pleasure in the piano was displaced by the love of guitar. I started playing guitar and writing songs at the age of twelve. I've written hundreds of songs, ranging from the ridiculous to the sublime. My first album, a collection of ten songs, was recorded from 1984 to 1986 and privately released in 1987. Called At Long Last Lynn, it was too Christian for the regular market and too secular for the Christian labels. Rock and a hard place.

It contains the following original material:
Can You Imagine That Night?
an uptempo Christmas song. The African Children's Choir used my tracks and put their own charming vocals on top of it on several of their albums, circa 1990. Perry Nunley says it makes him miss his balloon pants.

A Little Something To Go
a little rock'n'roll with a quick trip to New York thrown in for good measure; joined on background vocals by Marcia Coy.

If You Can't Live Without Me Then Why Aren't You Dead?
that timeless question... I thought it was going to be a country song when I conceived it but turns out I was wrong (boy, was I wrong!). I just learned that Dr. Joseph Bentz of Azusa Pacific University used this in teaching a Shakespeare course... go figure!

Walk On By
no, not the 60s classic; this one was inspired by Lynyrd Skynyrd's "What's Your Name?" - I thought, "you don't want to know my name--" and it went on from there. Background vocals by gospel greats Howard McCrary, Debbie McClendon, and Priscilla Navarro.

Made Too Young A Mother
I've been told it's too autobiographical for comfort; I've also been told it's "perfect" - hard to know: eye of the beholder; ear of the listener.

Motel Madonna
my car broke down and I spent the night in a cheap motel, next door to the ladies that were living this one; Dr. Diana Glyer, also at APU, uses it as an example of persona, assuring her students that I have never been a whore. I appreciate the confidence of my friends! Fabulous bottleneck guitar by John Goux.

The Wages of Sin
the Gospel in a nutshell, with saxophones and a genuine reverse cymbal crash (by Dave Crigger). Wow. Marcia Coy and moi again on background vocals.

The Maker of the Universe
my ex- on bass flutes (which look like plumbing, really) and swimmy snyths and layered Lynn vocals, oh my.

"A f*ing sensitive singer!" or so I was told by a VP of A&R at a major label (such a compliment! hmmmm... - he didn't sign me but I suspect he just didn't know what to do with a large blonde - so few do - *sigh*). It's a long story, the recording of this project, and a long time coming - which is why we called the collection At Long Last Lynn.

I've promised to record Emotional Junkie for a psychiatrist friend of mine (!!) and there's a collection of songs which beg to be assembled in the light of the blitzkrieg divorce... We'll see.

Other music that's rich and rewarding to me at this point in my life (and, boy, it took a long time to get here!) is what the contemporary Christian music commonly referred to as "worship music" and I'm blessed to participate in a couple of worship teams on a regular basis, primarily at St. Jude's. It's very different from performance. I did some recording in preparation for House of Bread and we recorded the premier performances; I remixed them with Jeremy Oldson (blogged about it). I'm not sure that I want to release it beyond the immediate circle of church and participants - it's more a record of the performance than a representation of the project, if you know what I mean. But I expect we will record the project "properly" before too much time goes by; the other singers have also requested that I record the project myself. Maybe. As I know more, I'll share it here.

We did record a whole bunch of worship music (including one of mine, Shepherd Me, loosely based on the well-loved 23rd Psalm) for a friend's wedding in Spring of 2005. We recorded 14 songs live to CD in a single evening, so I've got issues with production and "perfection" (--sigh--) but it ministers to lots of people, so perhaps our humble little team, small but genuinely worshipful, will do some more work which I'll feel more comfortable knowing it's out there, being listened to... I'm working on the concept of "good enough." And, as mentioned up top, you can watch Take Down The Tree and Lucifer's Song on YouTube.

God bless you, thanks for visiting, come back any time.