Over the course of about five years I wrote a musical —a song cycle, really— based upon the book of Ruth from the Bible. It started in 2001 with Boaz' Song when I pondered the subtle love affair implied in Ruth, which begins when Boaz asks his steward, "Whose damsel is this?" (Ruth 2:5, KJV; I love the word "damsel").

One night after a worship team rehearsal I was asked what I'd written recently and I shared this song with Sally Heimann, one of St. Judes' worship leaders at the time. She said it sounded like a song from a musical; amazingly, that thought had never occurred to me. We laughed about it and she said, "Yeah, you could have Orpah sing, "Bye bye! So long! Farewell!" and I thought that was really amusing. But I warmed to the thought and gradually started writing other songs; my goal was to tell the Naomi-Ruth-Boaz story and stay consistent with the account from the Bible.

I have performed portions of the piece at Azusa Pacific University at the request of two professors for several different classes. With the generous support of the St. Judes' worship team, we presented House of Bread in its entirety on Saturday, June 23rd and Sunday, June 24th, 2007. The audiences were moved and delighted - lots of applause; it will be staged again, God willing and the creek don't rise!

More details and the program book can be found at RuthMusical.com, including an explanation of gleaning.

I don't yet have suitable recordings but all the lyrics are linked at the House of Bread song list and also at Moonbird Music Co. 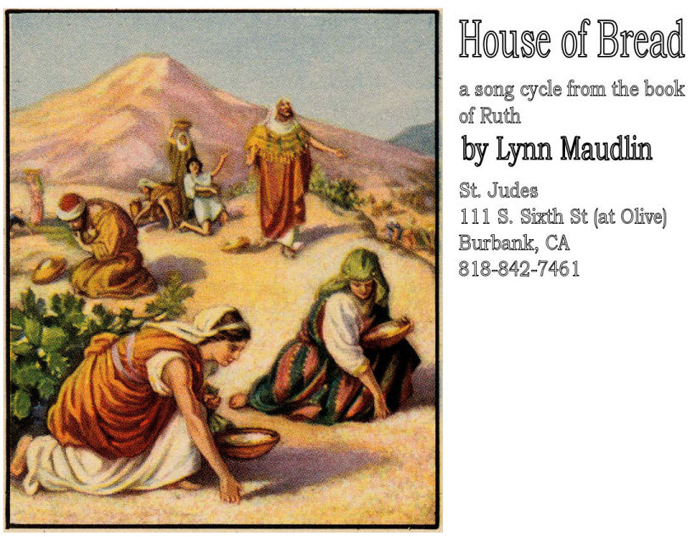 An excerpt from the program book:

Some background on Ruth:
It's very hard for me, as a 21st century American, to relate to "levirate marriage" where the brother of the deceased husband marries the childless widow in order to raise children in on behalf of his brother. To generalize, women historically had two life paths available to them: to marry and raise children or to be a harlot. In a time without Social Security or welfare benefits, widows and orphans were especially vulnerable but a widow with a son had an advantage - they could glean enough to survive and as an adult he would care for his mother. Deuteronomy 25 gives the law to Israel that insured God's people would not be dishonored by neglecting their widows.

If a brother refused to take his brother's widow, she would take him to the elders (and court of public opinion) and make her claim against him; if he continued to refuse, she would remove his sandal in their presence and spit in his face. Happily this doesn't happen in the book of Ruth: these are near kinsman but not Mahlon's brothers. Boaz is clearly interested in redeeming the land and marrying Ruth whereas the nearer kinsman, for whatever reason, is only interested in redeeming the land and chooses to back out of the deal when he realizes he will be required to marry the Moabite widow. In this instance the go'el, the nearest living male relative (the Nearer Kinsman, in our presentation), removed his own sandal in front of the witnesses as evidence that he refused the responsibility; this action freed Boaz to marry Ruth.